This is a weird one, mostly in far hindsight. The really kinetic, armor-on-armor phase of the war was pretty much over, but there were still missions that looked like they were the last bits. This was one of them. We went out to cover what I still think is the only actual former surrender/capitulation of an Iraqi general. The guy saluted our colonel, turned all his tanks and people over, and went on to probably lead a Sunni jihad. Who knows? We then spent the day disabling a whole lot of T-72s, which near as I could tell consisted of cutting their fuel lines and smashing their lights. I guess it worked, because I don’t think al-Qaida in Iraq ever attacked our forces with armored columns.

We spent the day mostly in two areas: the outskirts of Fallujah and Ramadi. Both were new names to me at the time, but they obviously would become infamous over time as flashpoints in the Sunni Triangle. In Fallujah we mostly saw cows and old families, but we never really went close to the city. In Ramadi, what seemed like a friendly visit escalated quickly, and I remember seeing what looked like the entire town coming out to meet us. Still not sure if it was a greeting or an attempt to rob us of our humvees. I just know it was chaotic, and edgy, and probably a glimpse of the future.

Yesterday was weird. Like something out of a movie. The throng pressed against me, begging for food, begging for anything. What to do? The humvee to my back. I can’t go forward.

Let’s take it from the top.

The day started at the early hour of 4:30. I hurriedly dressed and got the truck ready for a convoy to what I thought would be a capitulation ceremony involving COL Potts and some Iraqi generals. Found out that was wrong right away. We were going to a FARP [forward arming and refueling point] where we’d wait for everybody to get back from the ceremony, and then we’d go destroy the generals’ tanks.

We took the News Hound because it had “armor” and a crew-served weapon mount. The armor was the old tin-can style, and Muma mounted her SAW – a far cry from a .50-cal – on top. Photo by me.

The FARP was roughly 90 km west of Baghdad, on the side of the same highway we originally used to get to the airport. [SPC] Muma, SSG Freeman, and I passed the time talking and waiting for the helicopters. Around about 11 o’clock they arrived and we all set off, with Romeo [Gacad] and Dan [Wiltshire], for the tanks. 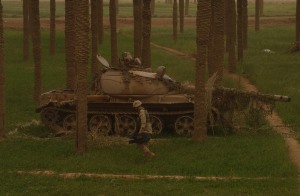 Dan Wiltshire lugs his old Beta camera past a T-72. Photo by me.

It was a long, slow drive down a raised road in a green, lush neighborhood on the banks of the Euphrates. Adults and children waited along the road to wave, cheer and beg for candy. Muma and I sat ready with our weapons, but everybody kept a respectful distance. 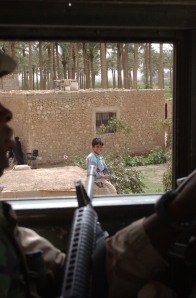 This is NOT as dangerous for this kid as it looks. Photo by me.

This might be the world’s sickliest cow. Photo by me.

We drove farther down the road until we turned off again. This neighborhood had nothing green or lush about it. Wasteland is the first word that comes to mind. Dirty people. Little water. Dead chickens everywhere.**

This is what happens when you surrender. We WILL smash your lights! Photo by me.

When we run out of lights, we will cut the crap out of your fuel lines! That is most likely Romeo Gacad in the back, as always taking a better picture than me, Photo by me.

We stop to destroy a few T-72s [Iraqi armor via the Soviet Union]. this crowd doesn’t maintain a respectful distance. They’re in our faces, shaking our hands, smiles all around. They’re amazed to see a female Soldier (Muma). They want American dollars. They want whiskey. Out of smokes, I trade a Jolly Rancher for a cigarette. Chaos.

They look trustworthy. I will by all means smoke their crappy state-produced tobacco. It’s their thousands of friends over in the city we should be concerned about. Also? One of these men took my newest copy of US News. Photo by me.

I guess my niceness unleashed theirs. They all want food. Now they want my Rolling Stone, they take a US News. I’m all but pushed into the truck. SSG Freeman has to get them to back up. We get some space and move on.

We love Michael Jackson! And George Boosh! Photo by me.

But they follow, the crowd becoming a mob, with the situation appearing hairier each mile we travel. These people appear desperate, but the thread of violence is thick in the air. Now all the faces aren’t smiling. All the thumbs aren’t up either.

He was saying something. It might have been in Arabic. Who knows? Surely it wasn’t important. Photo by me.

COL Potts finally decides the situation is getting out of control. We turn around and begin the long trip back to the airport. One stop and a broken track^ later, we arrive at 11 p.m. The day is over.

These people are so poor they’ve become desperate. It’s sad. But it makes me glad to know I’ve been part of making their lives better. Bush may have had his reasons for this war, but God had another plan entirely.

* As stated in the photos, “destroying” tanks meant mostly cutting their fuel lines and smashing their lights. I guess that made them unusable? I think the point was to save them so the Free Iraqi Army or whatever it was going to be would have crappy tanks.

** How I neglected to take a picture of a single dead chicken escapes me. They were everywhere! They kind of put us on edge at first, because dead wildlife, especially birds all over the ground is one of those things you look for in a biological or chemical attack. Fortunately, it appeared they were part of a chicken truck wreck. At least I hope so, because we all know how long it takes Uncle Sam to get around to admitting troops were exposed to something.

^ Broken track is what armored vehicles have to do when something goes wrong. Basically a link in that big track gets broken or lost, so they have to roll it all the way out, replace the broken link, then roll it back over the wheels and attach it. It’s time consuming, and we were tired, and the fireworks we saw driving down the road were likely pissed-off Sunnis telling their buddies where we were, but you don’t leave the armor behind after a day like that.

Hi, I’m Jake. Here are some descriptors that apply to me: writer, photographer, soldier, husband, son, brother, sergeant first class, geek, father, runner, reader, Hawkeye fan, lover of LOST, fan of Elmore Leonard, Sports Illustrated subscriber. I like a lot of things and want to start writing about them again. I used to blog a lot, but now I do all my writing for the Department of Defense, either at my day job with the Defense Logistics Agency, where I edit Loglines, or when I moonlight as a sergeant first class with the Army Reserve’s 200th Military Police Command. I hope you like what I’m trying to crank out here! You can follow me at Twitter through my handle @jakeboyer.
View all posts by Jake Boyer →
This entry was posted in Army, History, Iraq, Journals, OIF War Journal, Operation Iraqi Freedom and tagged 2003, 3rd Aviation Brigade, 3rd Aviation Regiment, 3rd Infantry Division, 4th Brigade, AFP, al-Qaida in Iraq, AQI, armor, Army, capitulation, Col. Potts, Dan Wiltshire, Daniel Wiltshire, Fallujah, general, Iraq, Jacob Boyer, Jake Boyer, jihad, OIF, Operation Iraqi Freedom, Ramadi, Romeo Gacad, Spc. Dan Wiltshire, Spc. Jacob Boyer, surrender, T-72, tank. Bookmark the permalink.